An article in the Guardian makes the case for choosing OpenStreetMap over Google Maps:

“Place is a shared resource, and when you give all that power to a single entity, you are giving them the power not only to tell you about your location, but to shape it.”

There isn’t just a responsibility in the users of maps to be conscious of the power that maps hold, but those who create maps, the cartographers, must also be aware that:

“maps are political, that maps exhibit and promote a political orientation. They’re about something. They have an agenda.”

He continues to say that cartographers:

“want to pretend their hands are clean: maps are just a tool. But you can do bad things with a tool and you can go good things with a tool. I’ve been suggesting to the hardest-edged people of all that they could put their epistemological and ontological arguments on a really firm foundation by simply acknowledging the fact that they are making the world.”(emphasis added)

Maps make tangible and enshrine the opinions of others about what is worth recording on a map. Maps really do make the world, and Google’s Street View has taken special care to make it feel like you are within a world. Google worked hard at improving the layout and experience of Street View (drawing from earlier non-Google projects that attempted something similar), with a valuable end result: “The effect of hopping from one photo to the next in Street View is one of walking through virtual space.”  That is a great success for Google (even though it sometimes feel like I’m walking through space with seven-league boots). The author alludes to a story, attempting to understand Google’s end goal:

“ In a short story entitled “On Exactitude in Science,” Borges tells of a long-ago empire where “the Art of Cartography attained such Perfection that the map of a single Province occupied the entirety of a City, and the map of the Empire, the entirety of a Province.” In Borges’s empire, the importance of the cartographic guild grew as the map grew, until finally the empire was completely covered by a map of itself.””

One of the major benefits of online maps is that, “Online maps show various details – like roads, or street names – only at certain zoom levels.” as they can share more information than a traditional paper map. Beyond online maps, this essay goes further to acknowledge that:

“Every representation, in every medium, is subject to procedural artifacts and the judgements of its creators. Some artifacts are more obvious, and some judgements less expressly intentional, but all of our attempts to process and describe our surroundings must contend with these forces.”

For example, this Council on Foreign Relations map that documents the prevalence of vaccine-preventable illness worldwide is fascinating. There aren’t any cases in Algeria, Libya, Kazakhstan, or small island nations… in fact if you look at the map closer, you realize that it doesn’t reveal when there is no data for a country or if it is genuinely vaccine-preventable illness free! Even worse, there are 87 cases of Measles that were reported for Algeria. But they aren’t on the map. If you download the data, you’ll notice that there is not a numerical longitudinal value entered in the dataset. So the case was not plotted.

No map or mapmaker is perfect–in fact, if you were one of 30 people on University of Michigan’s Ann Arbor campus not too long ago, you’d be reminded of that fact. A high school student asked these 30 people to draw a map of the world–and you may also be impressed as to how accurate the maps are in aggregate: 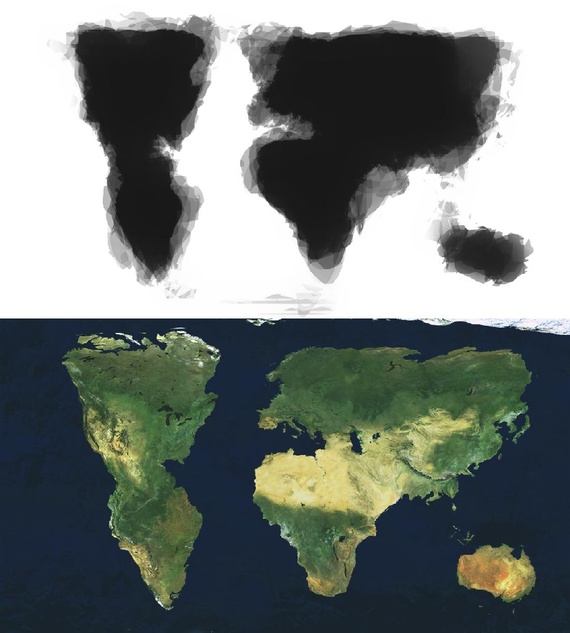 Mapping has a habit of leaving people out (like most island nations in the above aggregate map!). An increasing movement toward urbanization has had (maybe) unintended effects on the population of cities.

Modern cities which are “held up today as urban exemplars” got that way by focusing on “a differentiated demographic: singles, gays (particularly in the era prior to gay marriage, adoption, and child-rearing), and empty-nesters.” However, the effect this has had on the demographic makeup of cities is that “urban cores lost out in the battle for families to the suburbs”–families, and the demographic diversity that they bring to cities, increasingly live in the suburbs, and don’t seem to be valued very highly in the urban-focused rhetoric.

Of course, the battle between suburbs and urban areas has been going on for quite some time. This essay/book review in The New Inquiry looks into who gets left behind in these cities of the future, noting “The question “Who are cities for?” haunts every privileged discussion about the joys of urban life.”

(For a peek at these urban trends, check out The Atlantic Cities)

Maps marginalize those without power, urban trends value gentrifiers more than their historical demographics, what hope is there?

When it comes to the Internet (and its resources), there is growing recognition of those that are being left out. Wikipedia has a project called “Wikipedia Zero” which aims to “open the online encyclopedia up to portions of the developing world where people may lack Internet access” by using mobile phones to transmit information. But for companies like YouTube, it isn’t necessarily possible to transmit what they offer to underserved places.

Thankfully, there are other design changes that can be made. In this essay, a web designer who used to work for YouTube recalls a project to reduce something called page weight, which correlates to the size of the page–the larger the page (the heavier), the longer it takes to load and the more data it consumes. Ultimately he realized that “Many of us are fortunate to live in high bandwidth regions, but there are still large portions of the world that do not. By keeping your client side code small and lightweight, you can literally open your product up to new markets.” The piece  is a bit technical, but the overall points that he make shines through the technical language. He uncovered the people that truly miss out when a page takes “forever” to load by our (privileged) standards, because it may never load in other locations.

As long as we’re talking about locations, I want to mention this. There is an old adage that wonders, “if a tree falls in the forest, does it make a sound?” An artist created a sound installation using an algorithm to comb public tweets on Twitter (using Twitter’s API) with the phrase “nobody listens” and then broadcasted them through a megaphone at a group of trees. A fascinating play on the old adage, but it gets better (at least I think so).

Somebody IS listening. The National Park Service is listening.

“For more than two decades the National Park Service and its contractors have conducted acoustical monitoring at park units throughout the United States. Most of this data has never before been widely accessible to the public, and the Western Soundscape Archive now makes available more than 10,000 spectral images from approximately 200,000 hours of park service sound level monitoring.”

It may sound somewhat creepy, in terms of surveillance, but it has been integral in monitoring the ecological health of the forests, among other factors.

If you don’t want to listen to the forest sounds, here is a song to get your weekend started: Yadi – Unbreakable (ft. Baaba Maal and The Very Best).

(I had this whole sentence talking about how rural areas typically aren’t mapped as well as urban areas but then I realized that I was pulling that statement out of nowhere and so I started doing research and I realized the government actually makes a fairly good effort (with success) at mapping rural areas, either to assess community vulnerability, food deserts, location of nearest hospital, or even animals like elk or wolves. Here’s an overview of rural areas in Wisconsin and a collection of maps of rural America, if you’re interested. And now I’m curious as to what gets mapped in rural areas versus urban areas and if that’s just a matter of community differences, or if there is something missing in either location. For what it’s worth, GPS doesn’t work so well when you’re indoors so smartphone makers have been focusing more on other techniques, such as using indoor geolocation, to improve the accuracy of your location data while using your phone.)